Union is Strength is a European journalism competition organized by Slate.fr in partnership with the European Commission. Forty French and European journalists have been selected to work as a team to write articles on projects funded by the European Union in Europe. A perspective of what the EU can do in its regions.

“Look over there, there are shelducks. It is the only duck species that lives in a salty environment. Claudine Loste, deputy coastal delegate at the Languedoc-Roussillon Coastal Conservatory, pays us a visit. Large bodies of water line our way. We’re thinking of sharing the sea, but it’s not the Mediterranean! Although it is very close, we go to the Aude on the lagoon, between the ponds of Bages-Sigean and Ayrolle. The side road of the Montpellier-Barcelona railway line takes us to the island of St. Lucia. Roadsides are not mowed. The vegetation is high. Undoubtedly we arrive in a regional nature reserve.

In the town of Port-La-Nouvelle, on the banks of the Robine canal, a work listed as a UNESCO World Heritage Site, stands an old agricultural estate partly dating from the 17th centuryand Century. The building was severely damaged as a result. In 2013, the Conservatoire du littoral considered giving the building a second life.

To save the heritage, restoration work will be carried out over four years, half of which will be financed by the European Regional Development Fund (ERDF) of the European Union, led by the Occitania region. The facade of the mansion has regained its colors of yesteryear: pastel green and red. A “Magnificent Empty Shell”which needed a new utility dedicated before the interior renovation could begin.

More of a refuge than a lodge

In 2016, the Conservatoire du littoral and its partners agreed on an ecotourism development of the area. Concretely, it is about accommodating tourists respecting the environment and energy sobriety. A first project is set up by a design office. He planned to renovate the property to make it a lodge with guest rooms at rather high prices but with assured comfort.

“It was a project that, in order to be economically balanced, should accommodate many people.”, explains Claudine Loste. Accommodating so many people in a nature reserve and using so much energy was not possible. “We didn’t want to twist the building to allow for functions, number of people, profitability…”adds the curator.

After deliberations between 2018 and 2019, it is the idea of ​​a coastal retreat that is eventually retained. A trip to Senetosa lighthouse hut, in Corsica, convinced them. In simple comfort, hikers come to eat and sleep for a night or two. “We said to ourselves: Let’s do that!” It suited our project better.”remembers Claudine Loste.

“This prompted us to redefine the project in a much more sober way in terms of comfort and the number of people to accommodate.”, she adds. The target clientele is no longer the same. This tourist offer is aimed at “nature lover” who would like to visit the estate during the day or spend the night there for around twenty euros. Accessible only on foot or by bike, the area would particularly welcome walkers, hikers and cyclists using the EuroVelo 8 route that runs along the canal.

The choice of sobriety

Workers are busy at the construction site amid piles of bricks, gravel and sand. The interior is still empty, but Claudine Loste can already guess what will happen: “Here it will be the kitchen with the dining room for dinner. There will be a small bike room here to charge electric bikes if there is enough power. Because the hut will have little electricity. The connection to running water was made, but not to the electricity grid. Only solar panels provide electricity apart from a gas group if required.

In order to reduce the energy requirement to a minimum, there is no freezer or dishwasher, only a refrigerator. The communal accommodations are also not heated, which limits the sleeping options in summer, between the Easter holidays and All Saints’ Day.

For the monument architect Sylvie Rapp, one of the main contractors of the project, the time has now come “the building that defines the use and not the use that defines the changes to the building”. The principle is simple, and yet it changes many practices.

“We didn’t say to ourselves, for example: ‘How many photovoltaic modules do you need to cook and wash for 30 people?’ We said to ourselves: “How many panels can we put on without it being ugly and that it is suitable? How many kilowatts will it produce? And of those kilowatts, how many people can we accommodate and at what level of service?” argues Claudine Loste. 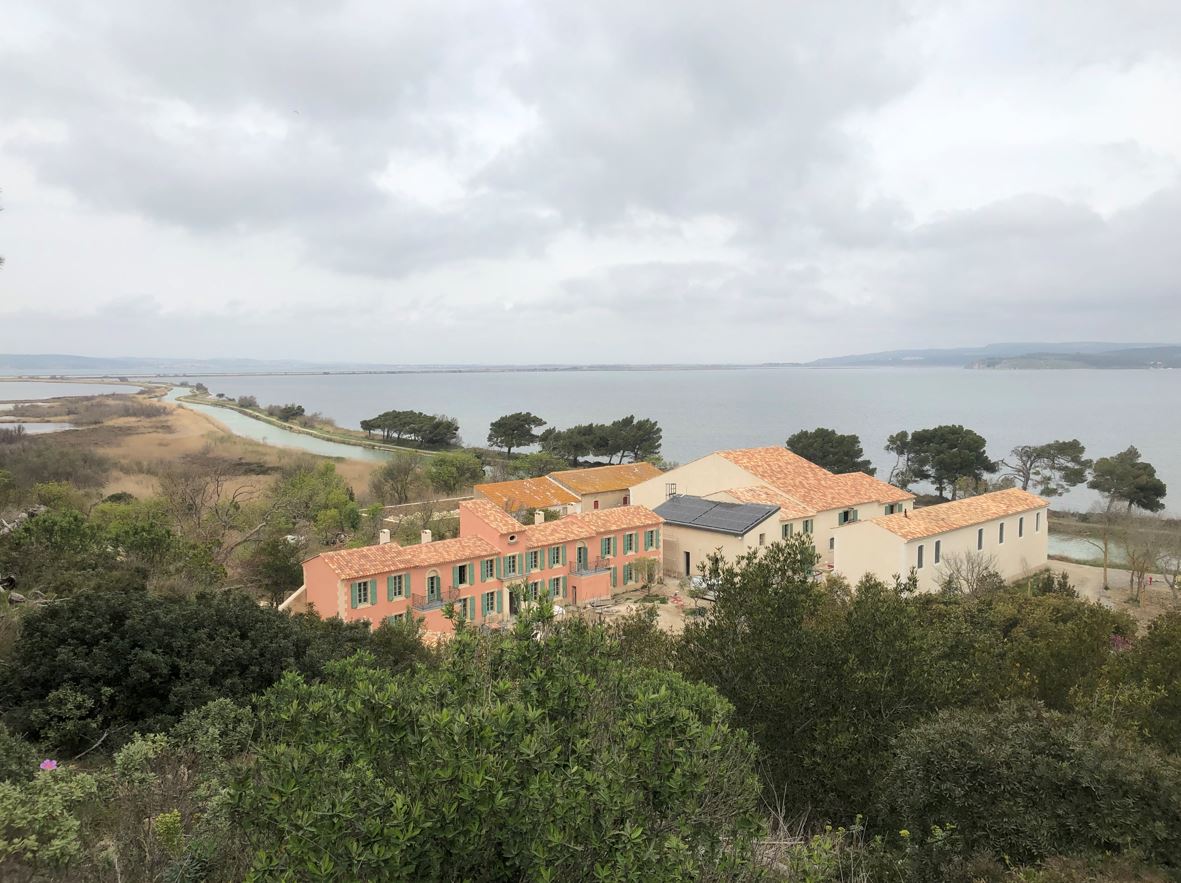 The Sainte-Lucie area under construction, delimited by the Robine canal. | Hugo Coignard

Photovoltaic panels are among the few new materials being introduced on the site. Because ecotourism is thought of from the construction site. “We use original and renewable materials. We work with Gard stone, which is locally sourced. The terracotta roof is made in Limoux [à 60 kilomètres à vol d’oiseau]. We also always use terracotta for the floor»explains the architect.

In the garden of the property, a man is fighting desperately to avoid mosquito bites. Alain Bergé, curator of the Sainte Lucie Regional Natural Park, supports the project by paying particular attention to biodiversity from the very beginning of the project. For example, small retreats were set up so that bats can find a new habitat during the work. The Narbonne Regional Natural Park in the Mediterranean is also responsible for supporting future operators of the refuge with their training on biodiversity issues on the island, which is visited by an average of 40,000 people a year. 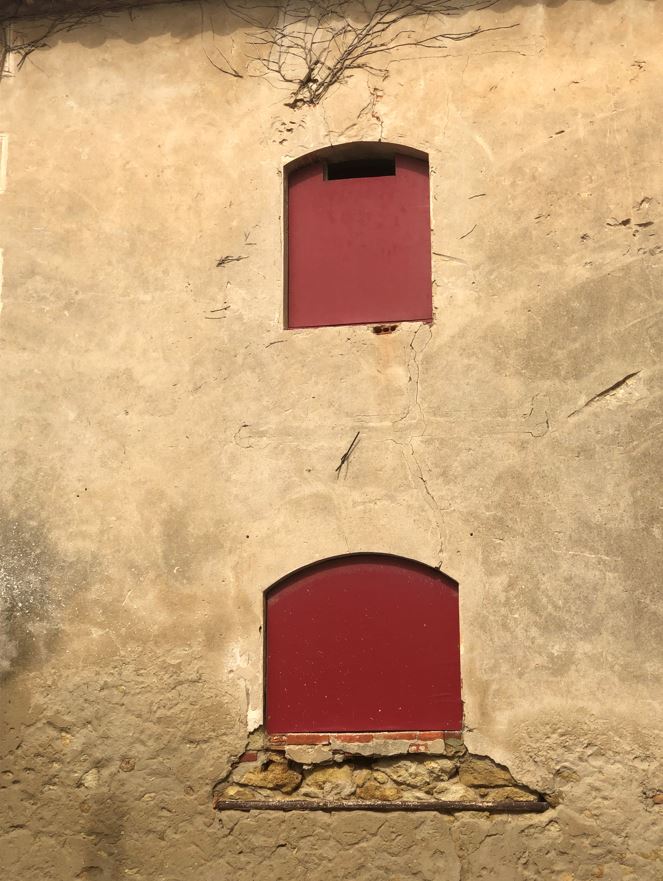 A shelter for bats installed during the works. | Hugo Coignard

The whole project was designed for that “sober and economical, but above all adapted to our circumstances: we have little energy and want to use as little water as possible”, sums up Claudine Loste. Landscape architect Nathalie Silovy also tries to create a no-nonsense water system for the vegetable garden she wants to recreate:

“Because there is a natural water source, we will not use city water for watering. Water is diverted by gravity. It’s a native system, very close to what they could have done back then.”, explains the landscape gardener. The plants planted are also adapted to their environment. “We will not plant an olive tree. There are no olive groves here. The species needs to be adapted to periods of drought and flooding.justifies Nathalie Silovy.

The area is classified as a flood zone. Necessarily included in the specifications, the dormitories and living quarters were placed on the upper floors. The ecotourism approach must take into account the consequences of climate change, especially since the projections for 2050 are not reassuring. Rising waters on the Narbonnais coast pose a long-term threat to the Sainte Lucie area, according to data Climate central. Until then, you can admire the fauna and flora of the nature reserve from the refuge: the opening is planned for spring 2023.

This article was produced as part of the Union is Strength competition funded by the European Union. The article reflects the views of its author and the European Commission cannot be held responsible for its content or use.