Unlike other more popular and common regulated DC/DC converters, fixed ratio converters allow designers to design and optimize their PDN network for higher system performance. By separating the functions of conversion, isolation, and regulation, significant performance gains are achieved that greatly benefit the final system.

A fixed ratio converter is an unregulated DC-DC converter that works like a DC-DC transformer. It features power density, efficiency and flexibility that enable the construction of power distribution networks (PDN, power supply networks) even more efficiently. This is true even in the presence of power sources with a wide output voltage range, such as batteries or renewable energy sources. Unlike other more popular and common regulated DC/DC converters, fixed ratio converters allow designers to design and optimize their PDN network for higher system performance. By separating the functions of conversion, isolation, and regulation, significant performance gains are achieved that greatly benefit the final system.

Advanced power distribution networks for automotive applications, light electric vehicles, robots, drones and industrial applications are all turning to higher voltage power sources – from 100V, 400V or even 800V – and higher safety extra-low voltage (SELV) distribution levels in the range of 48 to 60V to power the to provide the very high level of power required by these many newer systems. Many of them use batteries, renewable energy, and fuel cells as the primary power source for the PDN network and face a common challenge: wildly fluctuating output voltages. Because of this variation, the converter most commonly used for wide-range, high-voltage supplies is an isolated, regulated DC-DC converter that is designed and built as a single device.

However, a DC-DC converter does not necessarily have to perform the conversion, regulation, and isolation operations in a single functional block. In reality, each of these functions costs the converter efficiency points, which translates into higher power losses that manifest as heat. However, along with cost and reliability, heat is the most important factor that determines the achievable power density of a DC/DC converter solution. As system power levels increase to tens of kilowatts, power losses become problematic for the size and weight of the power converter. Thermal management also significantly increases the size and weight of the power conversion stage.

An alternative architecture
Most systems require isolation in the high voltage sections of a PDN for safety reasons, but the conversion and regulation functions can be separated. Once the high-voltage PDN is down-converted by the fixed-turns-ratio converter to the required SELV level (determined by the converter’s K-factor), the key architectural decisions are determined by the organization of the other conversions and regulations in order to ensure the performance for to optimally manage the various system loads.

Due to increasing power levels in applications such as high performance computing systems and electric vehicles, the use of 54V or 48V voltage levels as the SELV distribution voltage level, rather than 12V, is becoming more common. Due to the higher load currents, these higher voltages offer significant reductions in power dissipation (I2R) and improved efficiency, in addition to weight and cost advantages through the use of cables, wires, connectors and copper power planes on the smaller electronics board. However, the key to using fixed conversion ratio converters in the front-end architecture of these systems lies in the performance of any downstream intermediate converter and load point controller (POL, charging point) to handle a wide voltage range centered on these higher SELV levels. Buck and buck-boost regulators with ZVS (Zero Voltage Switching) topologies have advantages because they have better efficiency for higher voltage conversion and regulation.

As examples, let’s take three applications where significant performance gains can be achieved by separating these three functions: charging an electric vehicle, an agricultural harvesting robot, and a tethered drone.

To make EVs and charging stations compatible, whether they use the same voltage or not, the power distribution grid uses a Vicor non-isolated fixed conversion ratio bus converter (NBM) module to convert the voltage from 800V to 400V or from 400V to 400V 400 V to convert 800 V at 6 kW. This scalable, high-density, high-efficiency solution allows EVs with different battery voltages to use the same charging stations.

The electric vehicle market is increasingly using 800V and 400V batteries as the primary power source, which facilitates the adoption and acceptance of electric vehicle technology due to their ability to quickly recharge at this voltage level. Charging stations are becoming more established but do not always accept these two types of battery voltage. Automakers are developing on-board systems that either step up the voltage from a 400V charging station for an 800V vehicle, or step it down from 800V to 400V for better compatibility and faster charging. The power levels of these auxiliary power converters range from 50 to 150 kW. Since the charging stations have an isolated and regulated DC output and the 800V or 400V battery has an isolated high voltage DC converter for downstream systems, with 800V converters -400V bidirectional there is no isolation and regulation required. By using a high switching frequency topology, efficiency approaches 99.3%, significantly reducing the size and weight for this type of converter. 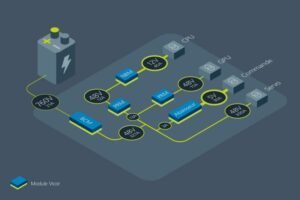 To handle the wide range of loads while conserving battery power, a harvester’s power distribution networks use a fixed ratio Vicor Bus Converter Module (BCM) to produce a 48V bus that minimizes the losses associated with lower voltage buses are. Power is thus delivered to the loads with fixed-ratio or regulated point-of-load converters such as Vicor’s NBM, PRM and ZVS buck and buck-boost regulators.

Harvesters are large machines that require up to 20 kW of power, typically provided by an 800 V battery. The efficiency of the PDN network, which results in longer run times between charges, is important for this type of application. An isolated bus converter or a fixed conversion ratio converter is used to bring a high voltage down to a SELV level such as 48V, which provides the best distribution efficiency for cables and connectors. Bus converters can be easily paralleled to match the front-end power conversion stage and offer significant design flexibility. Conversion and direct 48V regulation can be achieved for the various system loads using high-performance buck-boost or buck-only ZVS regulators. For 12V loads such as that of the system CPU motherboard, the best option for efficiency and the one with the best power density is to use a non-isolated 48 V to 12 V fixed conversion ratio converter. The regulation is then performed by the conversion stage of the multi-phase 12 -V-buck regulator of the load point. 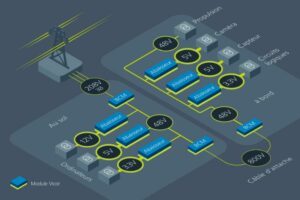 To drastically reduce the gauge and weight of a drone’s tether cable, the power distribution network uses a Viver Fixed Conversion Ratio Bus Converter Module (BCM) to boost cable voltage up to 800V. As with other PDN networks, the 48V bus is used locally to minimize losses on the ground and in the air. The BCM module is also used to isolate and reduce the rectified output from a single phase or three phase AC supply up to 48V.

Tethered drones are used by security, fire and rescue teams for stationary observation, communication and lighting purposes. A two-way fixed ratio converter creates a highly efficient flexible system that can utilize a SELV battery power source while minimizing cable size and weight to maximize uptime and payload. In this type of application, a K=1/8 bus converter (used in reverse) boosts the voltage from 48V to 384V to send current over the tether while reducing cable cross-section and losses (I2R). The same K=1/8 converter is also onboard the drone to drop the voltage from 384V to 48V and power the onboard electronic components and rotor system of the drone. The PDN network maximizes the efficiency and power density (in terms of size and weight) of fixed-ratio converters, as well as the benefits offered by the drone by freeing up space for payloads. In future applications, a K=1/16 converter will be used to boost the voltage from 48V to 800V, allowing the tether length to be increased for high-altitude operation while further reducing cross-section and cable weight.

The efficiency and density of the power system of a PDN network is proving to be performance critical in terms of uptime, recharge time, distance traveled and payload capacity, to name just a few important characteristics for the automotive, robotic and drone markets. As we have clearly demonstrated, PDN performance can be improved by using fixed conversion ratio converters, including when using wide voltage range power sources such as batteries. In this type of application, the voltage isolation and regulation functions, among others, can be performed upstream or downstream, using higher voltage distribution in the network to reduce the cross section of cables, connectors and copper power planes on the system boards. The PDNs shown here are examples of the use of fixed-ratio converters in combination with high-performance ZVS regulators to help customers innovate by offering solutions that can increase performance and thus provide a competitive advantage.