The French group commits this time 1 to the American company NextDecade to buy, from 2026 and until 2041, liquefied natural gas (LNG) to be exported through its Texas terminal Rio Grande LNG, which is currently still in the project phase. Friends of the Earth France denounce a toxic contract and point the finger at the inconsistency and irresponsibility of Engie and the French government: in 2020 they broke off negotiations with NextDecade over the environmental impact of this project 2 .

NextDecade announced today that it has signed an agreement with Engie to sell and purchase 1.75 million tonnes per year (Mtpy) of LNG for a period of 15 years. This gas would be exported from the Rio Grande LNG terminal in the Rio Grande Delta in south Texas, upstream of America’s major shale and hydraulic fracking basins, particularly the Permian and Eagle Ford basins. This project, which has been the subject of heated debate for years Despite controversy and strong opposition from local communities, indigenous peoples and international civil society, it could become operational in 2026 and extend the contract period at least to 2041. Also behind this extremely damaging project is the French bank Société Générale, which has been responsible for the financial development of Rio Grande LNG since 2017.

The risks associated with the project are numerous, demonstrated and recognized: mega-project at the heart of the rich and vulnerable ecosystem of a nature reserve; threat to the survival of endangered species; risks to residents’ health and livelihoods; Violations of indigenous peoples’ right to consent 3. Rio Grande LNG also poses a major threat to the climate. In 2019, the Trump administration rejoiced in this key project to develop the Permian Basin, whose intensive exploitation alone will account for 10% of the remaining global by 2050 carbon budgets to stay below 1.5°C 4.

“This treaty embodies as never before government hypocrisy and ambiguity on the climate and energy crisis. Engie’s main state shareholder refused to sign such a contract almost two years ago because of contradiction to its environmental claims, to better reconsider this decision today by actively or implicitly giving the green light. »

Private Finance Campaign Manager at Friends of the Earth France

Lorette continues: He insists that the war in Ukraine is urging us to break free from fossil fuel dependency, but is sinking us into a decade-long dependence on shale gas, with no short-term solution of this type of deal.”

Indeed, this contract between Engie and NextDecade is not an isolated case. In late 2021, we revealed the signing of a deal between Engie and a NextDecade competitor, Cheniere, to import shale gas to France – negotiated in secret and in total ignorance of its environmental and climate impact5. This contract effective March 2022 was changed from 11 years to 20 years by 2041. 6. The French government bets on increasing LNG imports, especially from the United States, and in the same line proposes the installation of a new floating import terminal Le Havre, in partnership with TotalEnergies and Engie 6. 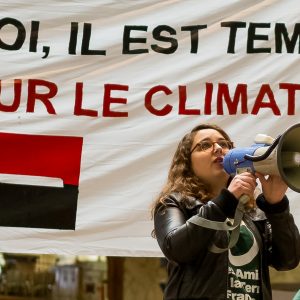 “Just days into Emmanuel Macron’s second term, and as he sought to green his image between the two rounds, this shale gas import deal is a terrible signal for the next five years. With the complicity of Engie and Société Générale, the government is burying the French and European climate targets.”

Private Finance Campaign Manager at Friends of the Earth France

More details on the impact of Rio Grande LNG

Dangers to the health and safety of local residents

Threats to the rights of indigenous peoples

Threats to employment and the local economy