Faced with Russia’s invasion of Ukraine, the first sanctions imposed by the European Union (EU) were diplomatic and financial. The continuation of the war prompted the Twenty-Seven to widen the scope of sanctions. Since April 8, 2022, the EU has banned Russian imports of coal and other solid fossil fuels. Should we go further and expand the embargo, especially to Russian gas? Many voices disagree, highlighting the cost of the embargo to Europe, which could be penalized even more than Russia.

Opposition to the Russian energy embargo is based on the idea that there are no alternatives for businesses and households. To illustrate this argument, consider the situation of a company that manufactures a consumer good using an intermediate product that is itself manufactured using energy. No substitutions are possible. In this case, a 10% energy saving reduces the amount of intermediate products by 10% and therefore the company’s production by 10%.

However, this “mechanical” vision of production neglects the possibilities of substitution: an energy substitute can be found by the company, or preliminary products that do not use this energy can also be offered by new suppliers, and finally consumer demand can move to others Goods when that energy-based good becomes too expensive or less demand-driven.

534 euros less per year for a Russian

Numerous historical examples show how these substitutions work. The effects of China’s 2010 embargo on Japan on rare earths were cushioned by the ingenuity of engineers who set up a recycling of substitutes. Similarly, the oil and gas embargo against Germany during World War II was heavily amortized by the use of carburetors to power civilian vehicles.

In order to assess the economic consequences of the embargo, we take these substitution options into account in a recent report from the Center for Economic Research and its Applications (CEPREMAP). It is assumed that it is very difficult to substitute Russian energies with other inputs: the elasticity of substitution used is then three times lower than the usual estimates. Regarding the embargo, the EU is supposed to impose strict barriers against all imports from Russia (including energy). This strategy, which tends to overestimate the cost of an embargo on Russian energies strictly speaking, is closer to the current state of sanctions (financial, agricultural, aviation, etc.). After all, Russia is not completely excluded from international trade, reserving the opportunity to sell to other partners.

Our simulations show that the average annual per capita cost of the embargo corresponds to a reduction in EU gross national expenditure (ie the sum of household consumption, government and gross fixed capital formation) by -0.7%. The cost would be higher for Russia with a loss of -2.3% of its national spending (see Chart 1 below).

These high Russian losses underscore Russia’s heavy dependence on the outside world and a weak ability to offset its losses through other activities, although rising energy prices are cushioning this shock to Russia.

Even if the level of these losses can be discussed, this analysis already shows that the sanctioned country, in this case Russia, loses three times more than the EU. Expressed in euros per inhabitant per year, the annual cost of this embargo would be 534 euros for a Russian and 227 euros for a European (ie 908 euros per year for a household with two children).

Sectoral structures and country-specific external dependencies imply large differences in the costs of the embargo within the EU (Figure 1). Lithuania would be the most affected country (-5.3%) and Luxembourg would increase (+0.2%). Germany and France occupy intermediate positions (11th and 20th among the most affected European countries) with losses of -0.3% and -0.2% of government spending respectively. Our North American partners would be significantly less affected by this embargo with an annual loss of -0.03% for an American and even a 0.14% gain for a Canadian.

A price that will soon be difficult to bear in Russia

These results confirm that, in order to facilitate a concerted European decision on the embargo, a redistribution mechanism should be put in place within the EU to help the most affected countries and thus distribute everyone’s contribution fairly.

How can these differences between countries be explained? First, the model accounts for possible international redistributions: in the case of energy, Canada can sell more electricity to the United States, which can then sell more gas to France, which in turn can sell more electricity to Germany. Then substitutions take place: In every country in particular, households and companies buy less energy that has become scarce and expensive and use it where it is least substitutable for them. Finally, certain productions intensively using Russian inputs (including energy) are relocated to other countries. Taking into account each country’s sectoral and commercial specificities, the model explains why the countries consuming the most Russian inputs (including energy) will be more affected.

Given the reluctance to implement this embargo, these amounts may seem modest. First of all, it should be borne in mind that there are large internal differences within each country: in France, the transport and agricultural sectors recorded sharp falls of -6% and -4% respectively. Figure 2 below also illustrates the redistribution of activity between sectors, with an increase in the domestic energy sector (including nuclear) and less energy intensive sectors such as trade. 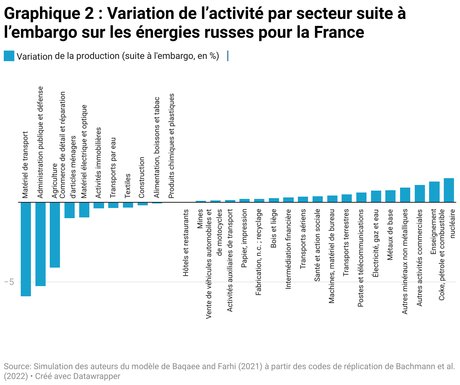 Because work, and therefore the income associated with it, depends on the field of activity, losers and winners of the embargo can occur in each country, which requires redistribution to combat the resulting inequalities.

These assessments underscore the global economy’s ability to absorb such a shock. Globalization has woven a web of trade links dense enough for redistribution to ‘insure’ countries against this negative but localized supply shock. The suspension of transactions between Russia and the EU alone explains the moderate level of costs.

In fact, completely excluding Russia from international trade would entail costs that would be difficult for the Russian economy to bear: every Russian would have to reduce their consumer spending by 33%, ie by 8,500 euros per year. This scenario assumes compliance by all countries, which is not realistic but is a measure of the great potential of commercial instruments in the range of sanctions against Russia.